In this paper the possibility of using the open sources of Earth's remote sensing data for satellite monitoring of agricultural land and supporting systems of precision agriculture is considered. For each source the level of data processing is given and necessary procedures of automated correction are described.

With development of new management technologies in agriculture, the need for regularly updated remote sensing data of the Earth has emerged. The acquisition of high-resolution data is possible on a fee-paying basis from commercial suppliers or in open storages of scientific missions. In this paper, the process of obtaining and preparing data from open sources is considered. Description of features of work with data sources, the basic levels of processing and necessary procedures of geometrical and radiometric correction are given. The information presented in the paper can be used in the development of precision agriculture systems. 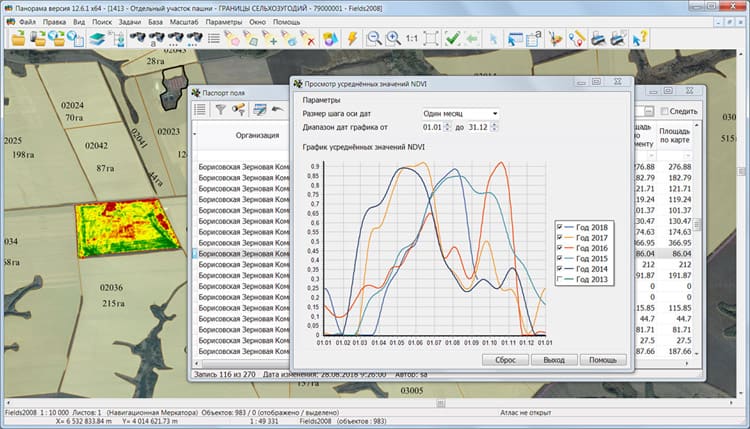 Precision agriculture is a modern approach to agricultural management based on the use of satellite navigation systems and Earth's remote sensing data (ERS) (Bychkov et al., 2009).

The construction and use of precision agriculture systems requires a large amount of regularly updated ERS data (Shcherbakov, 2008). Data for use in precision agriculture systems must have high spatial resolution due to the small size of the being examined objects, high temporal resolution for monitoring the state of the land and have channels in the ranges suitable for studying the state of soil and biomass (directly or using various vegetation indices).

Data can be obtained using commercial suppliers or in open sources of scientific missions. In the first case, data can be ordered from a large number of civilian satellites, with a specified processing level and in the necessary projection. At independent gathering and preparing data the economic efficiency of system is increasing, that in some cases can be decisive importance.

This paper discusses the main open sources of Earth's remote sensing data and necessary automated processing procedures for their use in precision agriculture systems. 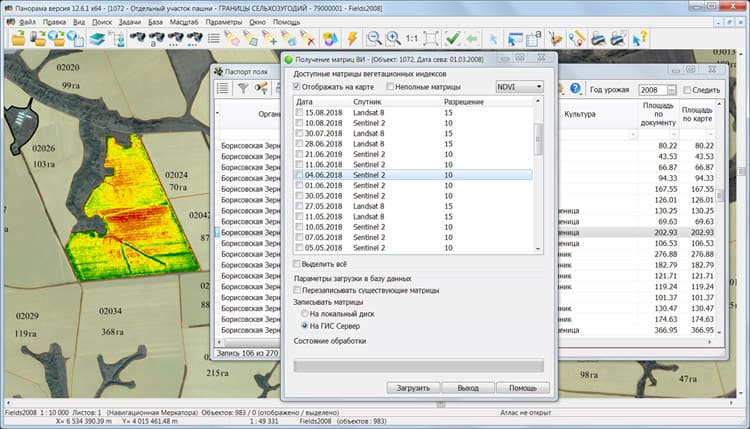 There are several global scientific programs of Earth's observing, that provide open access to their data. This is the Copernicus European program with Sentinel 1-3 satellites, the Landsat American missions with access to data from Landsat 1-8 and Terra satellites with EOS AM-1 satellite.

Only active passive optoelectronic systems of spacecrafts the Sentinel-2, Landsat-7, Landsat-8 and EOS AM-1 correspond to the objectives of the work.

Table 1 describes the characteristics of the considered open sources.

Data is provided in open formats. But not all formats are completely patent-free (JPEG2000). Work with TIFF-rasters is supported by all modern GIS software. While the HDF and JPEG2000 formats are less common, and for work with them a converting, import into an internal format (ERDAS Imagine) or updating of lower-level libraries (GDAL in QGIS) can be required. For converting and reprojecting of HDF-rasters, NASA provides a free tool with a mode of operation through a command line - HDF-EOS To GIS Conversion Tool (HEG).

Table 1. Return of finished tile by a vector map

All providers provide access to data via HTTP protocol, which provides simplicity and convenience of embedding in information systems. Access to some sources requires free registration.

The spatial resolution of Landsat images can be increased up to 15 meters using panchromatic fusion with a PAN channel. In some applications, for example, when calculating vegetation indices, panchromatic fusion can be used to increase the amount of spatial information (Johnson, 2014).

To describe the degree of processing of remote sensing data, there is a generally accepted model described by NASA while working on the Earth Observing System (EOS) program (Parkinson et al., 2006). In this model, all procedures of radiometric and geometric correction are distributed on several levels, from unprocessed "raw" data from the sensor at level 0 to the corrected and orthorectified images in a given projection at levels 3-4. In practice, various data providers often deviate from this model and use their levels.

Remote sensing data from various sources should be brought to a single high level of processing. For this, it may be necessary to recalculate the values of images to the albedo of the earth's surface (Surface Reflectance, SR) (Poghosyan, 1962) with execution of atmospheric correction, determine the areas covered by clouds and search for shadows from them.

Table 2 shows the degree of data processing for each source in question.

Data from Landsat 7 and 8 is provided in the form of digital sensor values (Digital Number, DN) with performed radiometric correction (elimination of sensor distortions based on regular recalibrations) and geometric correction (elimination of perspective's distortions and terrain irregularities based on GCP ground stations and a digital elevation model DEM) (Young et al., 2017). Second-level data in the form of an albedo of the earth's surface corrected by the angle of the sun and atmospheric effects are available only upon request, but can be calculated using formulas based on metadata from images (Ibid.) and with using any suitable algorithm of atmospheric correction.

For ASTER data of the "L1T" level, conversion to the reflectivity of the atmosphere (a script in Python or R is provided) (Krehbiel, 2017) and execution of atmospheric correction are required.

There are several "simple" ways to correct the influence of the atmosphere that do not require additional information about the state of the atmosphere at the time of shooting. For example, methods of Empirical Line (Karpouzli, Malthus, 2010) and various options for subtracting the dark area (Dark Object Subtraction, DOS) (Chavez, 1996). The choice of a particular method depends on the type of application and the intended content of the scenes.

After correction to the reflectivity of the surface, data from various sensors can be considered as similar (Stevena, 2003), but differences remain due to differences in the channel ranges of the shooting systems. In the tasks of calculating vegetation indices, there are methods for correcting the calculation values of various shooting systems (Yao et al., 2013).

Sentinel-2 satellite data is provided with a processing level of "L1C" in the form of an albedo at the top of the atmosphere (Top-Of-Atmosphere Reflectance, TOA) with performed radiometric and geometric corrections. Level "L2A" processing is possible with the free SEN2COR software. The utility allows you to perform atmospheric correction based on the model of LIBRADTRAN radiation transfer, to obtain masks of various types of clouds and channels of quality assessment.

Products from the MODIS sensor have a high level of processing and are immediately available in the form of surface reflectivity with correction of the influence of the atmosphere; additional processing is not required (Vermote et al., 2008).

The next stage of data preparation is the exclusion of cloud-covered areas. For images from Landsat 7 and Landast 8, a special channel of assessing quality with a clouds mask is attached in the metadata. For Sentinel-2 data, mask of clouds is automatically created during processing in SEN2COR. With data from the ASTER sensor, mask of clouds is not provided, but there are several algorithms for its creation: the "classical" ACCAA algorithm (Lang et al., 1999) and its improved version of NACMA (Hulley, 2008). The MOD09GQ product contains a cloudiness mask in a special channel, the MOD13Q1 data contains the value of the NDVI index based on observations within 16 days and does not need corrections.

The organization of satellite monitoring of agricultural land is associated with obtaining vegetation indices characterizing the development of plants taking into account local features of the contour of arable land. Use of open sources of multispectral satellite data allows to provide precision agriculture systems with up-to-date remote sensing data with a spatial resolution of up to 10 meters and a frequency of 1-16 days.

Open sources reduce the cost of maintaining systems of satellite monitoring, but increase the complexity of development. The final decision on the choosing the type of sources should be made individually for each project.

For the convenience of end producers, in the products of KB Panorama: GIS WebServer AGRO, "Panorama AGRO", "Workstation of agronomist" there are implemented the functions of satellite monitoring by obtaining geo-referenced values of vegetation indices, zoning maps and differentiated fertilizing using the external Geosys service.